A look back at the mobilisation of Aviation Sans Frontières

Here is a look at this unprecedented joint operation.

On 4 August, two detonations sounded in the port of Beirut. A warehouse storing 2,750 tonnes of ammonium nitrate had just exploded and was already spreading an unprecedented shock wave throughout the country. The toll was high: 91 dead and more than 6,500 injured. More than 300,000 people have lost their homes. Economically and politically, the country is devastated: 60% of the population now lives below the poverty line, and the Lebanese express a total rejection of their government. This situation is even worse with the resurgence of the Covid-19 epidemic in the country.

Beyond these observations, the images of devastation, destruction, and distress are the ones that have the most impact. Global solidarity quickly took hold with the United Nations launching a fundraising appeal for 475 million euros.

On 7 August, our association was among the first to join this solidarity movement. Gérard Feldzer, President of Aviation Sans Frontières, launched an appeal to all the entities, ASF Germany, Belgium, the United States, Holland, and Switzerland, to send medical and emergency equipment to Beirut in a similar spirit of solidarity.

To ensure the emergency delivery and efficient equipment distribution in the field, ASF is working with the British foundation International Health Partner (IHP). IHP has been known for the past fifteen years for its ability to receive and transmit donations of medicines from large pharmaceutical groups to local humanitarian actors.

In the two weeks following the disaster, this collaboration enabled nearly two tonnes of medicines transportation worth 114,450 euros; 26,813 emergency treatments were packaged in eleven pallets and transported by plane to Beirut.

In Toulouse too, Aviation Sans Frontières has mobilised for Lebanon. The Airbus Foundation and the Airbus Flight Test Department organised a humanitarian flight with an Airbus A350 Néola. Under the aegis of the town hall, the Occitanie-Toulouse delegation of Aviation Sans Frontières took part in sending medicines, masks, gowns, and gloves, as well as food and school equipment.

On their arrival in Lebanon on 11 September, these essential items went to local NGOs, such as Arena, the Lebanese Red Cross, and the Arc en Ciel association. 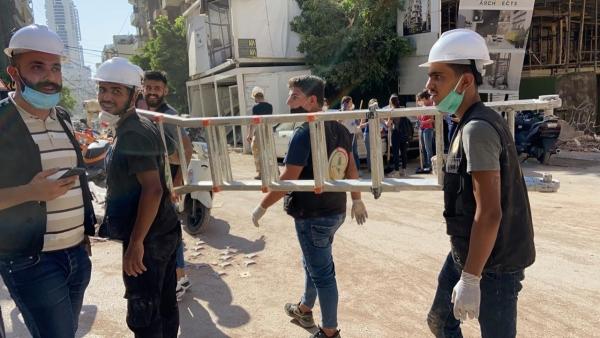 Two months after the explosion that devastated the heart of Beirut, reconstruction remains one of the country's priorities.  Photo credit: Anera

An echo of our Humanitarian Freight missions

We could provide such a rapid and coordinated response to the Beirut explosions because of our experience of sending humanitarian cargo all over the world. In 2019, for example, we distributed more than 32 tonnes of humanitarian supplies to destinations such as Bangladesh, Burkina Faso, Gabon, and the Democratic Republic of Congo.

In this sense, the coronavirus crisis has allowed us to adapt our sending of necessities to the health context.

However, the primary actors in these operations remain our members, volunteers, and our daily supporters, without whom it would simply be impossible for us to carry out our missions.

Today, we remain attentive to our partners in Beirut and ready to mobilise our skills and resources in case of a large-scale emergency.